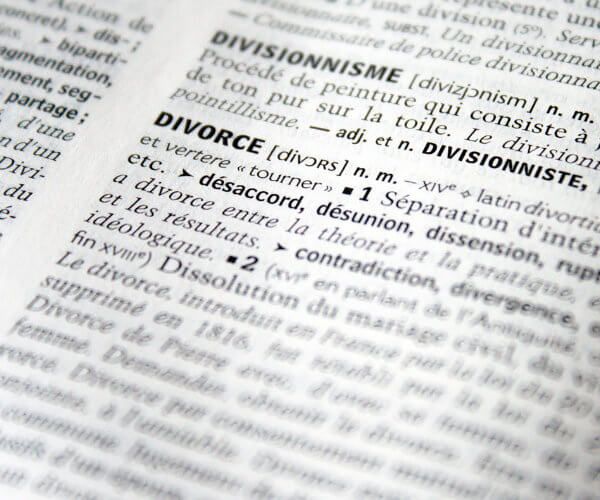 When a couple divorces, there is always a whole host of decisions that have to be made. Decisions about asset division, payment of any outstanding debt, spousal support or alimony, child support, visitation, and custody, to name a few. If you can come to an agreement about all major issues before trial it’s called an “uncontested divorce,” meaning no court decisions have to be made for you.

On the other hand, if you cannot come to an amicable legal agreement, it becomes a “contested divorce” and the court will have to decide which of you will be granted your requests. A divorce can start out as contested and then become uncontested as you work out agreements in mediation or on your own. Likewise, an uncontested divorce can become contested if one party changes their mind before trial.

In some cases, the divorce may be considered contested because one party does not wish to be divorced. However, all states now have some version of “no-fault” divorce, and they cannot require you to stay married. In these cases, the divorce will carry through eventually, but one party can make it a much longer and more uncomfortable process than necessary.

Generally, no-fault divorces state that a couple has a fundamental incompatibility or disagreement that cannot be solved. For instance, disagreeing on whether or not they should stay married.

What Are the Differences Between Contested and Uncontested Divorces?

One of the biggest differences in contested divorce vs. uncontested divorce is how long it takes to finalize them. Uncontested divorces usually make it through the legal system fairly quickly – although depending on what state you live in and how busy your courthouse is, it may not feel “quick.”

Another difference between the two types of divorce is the extent to which the outcome is appealable. In an uncontested divorce, both parties have to consent to the arrangement. Since you’re two adults striking a legal agreement, the court will not allow appeals after the divorce has been granted.

This doesn’t mean that you’re stuck with the exact terms of your divorce agreement forever though. If circumstances change – someone loses a job, buys a house, remarries, moves to another state, etc. – you can often modify your agreement after a certain period of time has passed. However, it’s less likely that you’ll need to modify the agreement if you both came up with and agreed to the terms together in the first place.

In a contested divorce that does not settle before reaching trial, the judge will be the one who decides on the outcome of your decisions. The judge may choose to prioritize certain concerns over others, but that doesn’t mean they will align with your and your ex’s priorities. For example, you may want to keep your house and your spouse may prefer to get the car. The judge may examine your case and decide it’s fairer to sell the house and give you the car instead. The more control you have over the process, the likelier you are to be happy with the outcome.

However, we know it’s not always possible to come to an agreement about important matters – especially if something like custody of your children is on the table. Contested divorces don’t necessarily have to be decided by a judge – you can also choose to settle. Keep in mind that you do not have to come to an agreement by yourself. Working with a skilled divorce lawyer and pursuing mediation (some courts require this regardless) can help you reach a settlement that works for everyone.

Do I Need A Divorce Lawyer for an Uncontested Divorce?

The short answer is “Yes.”

The long answer is – There are four major issues that you need to resolve in any divorce, contested or uncontested:

Depending on your family and your finances, these issues may be easy to solve, or quickly become complex and convoluted. You need to make sure that you are fully addressing each issue (including parenting plans and division of retirement accounts). Consult a divorce attorney. Bringing in lawyers does not have to make a divorce contentious or less amicable. It just ensures that you don’t forget anything or make any mistakes that will harm one or both of you in the future. The last thing you want is unresolved issues lingering after your divorce.